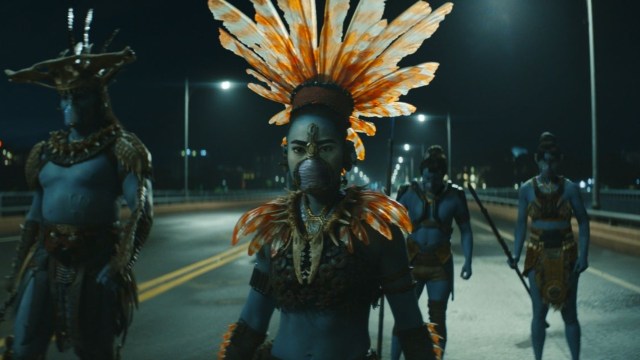 A delectable hidden detail in Black Panther: Wakanda Forever has come to light.

In an interview with ScreenRant, the film’s VFC editor Anedra Edwards encourages fans to pay close attention to the architecture during Shuri’s (Letitia Wright) journey to Talokan.

“During Shuri’s intro to Talokan, you’ll see a lot of the hieroglyphics that have origin in Mesoamerican culture and in Mayan culture. You’ll kind of see that if you really look into it. The game that they’re playing, where they’re using their hip to get the ball kind of into the hoop, when Shuri comes into the city, that’s coming from real Mesoamerican culture.”

The ancient Mesoamerican ballgame has many names, including ulama and pok-a-tok. Players use their hips to pass the ball. Indigenous people descended from the Mayans and Aztecs in Central and South America still play it today, which is why it became a defining element in the Black Panther. Edwards also went on to explain how the references to the game helped illustrate the identity of the Talokanil in the film.

“When you actually see Attuma and Okoye fight in Boston on the bridge, he uses his hip to actually toss one of the water bombs towards Okoye. So it’s kind of a nice cool little foreshadow. Well, why not just Namora throw the ball at it? She throws it at him, and he hits it with his hip.”

Ryan Coogler’s films are known for their exacting creative standards. The production team for the Black Panther sequel created a 200-page chronicle of the Talokanil outlining their history, technology, and culture. Rumor has it that the mythology of Talokan contained in the so-called production bible is as sweeping and complex as Wakanda. However, it takes place in a secret subterranean kingdom and fuses elements of the lost city of Atlantis with ancient Mesoamerican culture.

While Black Panther: Wakanda Forever may be the first time MCU fans catch a glimpse of Talokanil culture, chances are it won’t be the last. If Marvel Studios decided to green light a standalone film about the Talokan, the existence of the production bible might end up being the biggest Easter Egg of all.