Cyclist Grinds Out New FKT Across Iceland: Over 400 Km, Less Than 20 Hours

A millennial from Texas just became the first person to cycle across Iceland in less than 24 hours.

Payson McElveen, a rising star in mountain and gravel biking circuits, burned through the 413km ride in 19 hours, 45 minutes, setting a new speed record for the route.

It’s no joke to travel the route by any self-propelled means, but McElveen’s time is ridiculous. The terrain is rugged, the remoteness is intimidating, and the weather during his ride on September 11 was awful.

All that and, according to McElveen, setting the record wasn’t really the point. He’s no stranger to all-out Fastest Known Time attempts, but this time, he just wanted to challenge himself and enjoy the terrain.

“The competitor in me will always enjoy racing to throw down a fast time, but this project was less about an FKT effort and more about just seeing if it was possible to ride across the whole country in less than a day,” he told VeloNews. “Ever since the success of the White Rim FKT in 2019, I’ve been thinking about other geographically focused routes to do a big effort on. To me, those are the challenges that inspire me most these days: Start at one landmark and ride as fast as you can until you literally run out of road or trail. In this case, that was hitting the ocean on the south side of the country.” 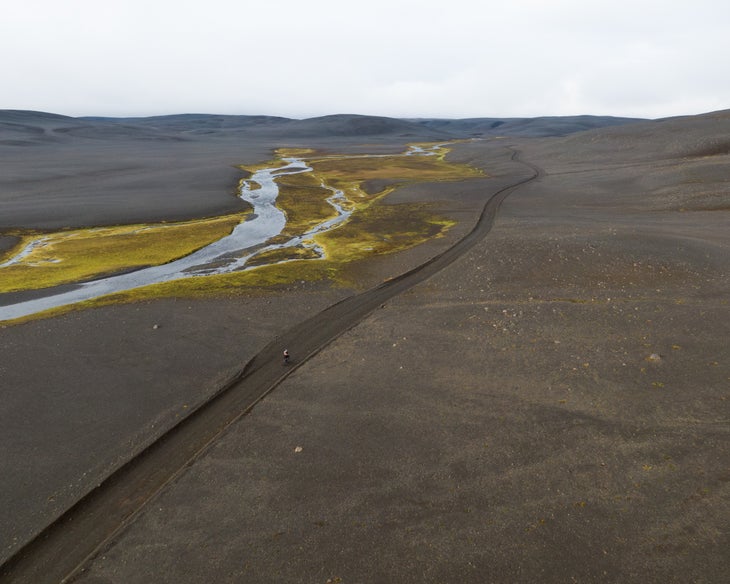 In Iceland’s highlands, the roads are so remote that they’re only open in summer. Photo: Evan Ruderman

McElveen’s north-to-south route took him through the country’s interior highlands — mostly stark volcanic desert, veined sparsely by high-clearance access roads. The challenge would be steep under any circumstances. Most of it proved to be deep gravel, and it required occasional river crossings, which the cyclist forded in neoprene socks.

Chris Burkard, the adventure athlete and photographer, helped McElveen come up with the idea and has explored Iceland extensively. For VeloNews, he pointed to the pure difficulty of McElveen’s ride itself, but also to a certain esoteric significance that underpinned it.

“More than just an athletic achievement, Payson’s ride pays homage to thousands of years of overland travel through this wild country and in many ways is impossible to truly describe to anyone who hasn’t sunk their tires deep into its remote and endless gravel roads,” Burkard said. “Having personally ridden through it, around and across it, slogging thousands of miles of Icelandic gravel –- I know a thing or two about Iceland’s terrain by bike, and this achievement can only be compared to a near-mythical achievement. Fitting for Iceland, to say the least.”

The grim weather compounded the Iceland FKT challenge. McElveen rode into a persistent headwind for most of the day, got soaked by over seven hours of rain, and endured temperatures as low as -1˚C. 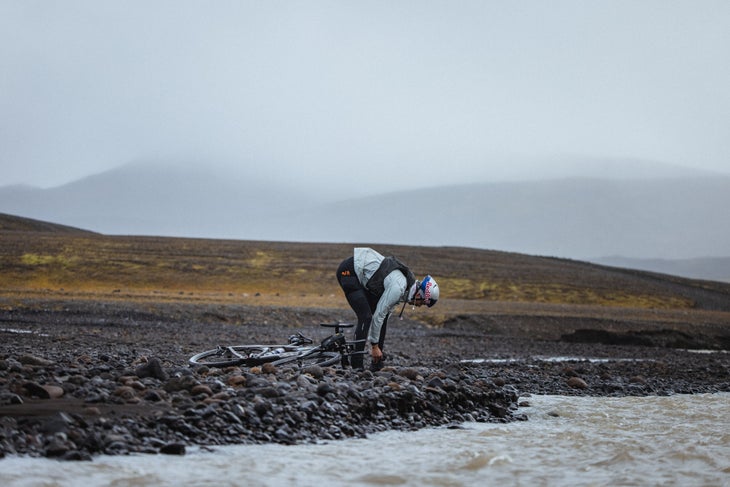 “It’s funny how our ‘weather window’ would qualify as the worst riding weather you’d probably have all year elsewhere,” McElveen said. “Iceland’s weather is some of the most dynamic in the world, especially in September. I would strongly recommend riding in the warmer, drier months of the summer, and take more clothing and food than you think you need.”

He wasn’t kidding about the food. Knowing that no food was available on the route, McElveen ate a 7,000 calorie breakfast before he took off.

In the end, the young cyclist’s invincible psych won out. To hear him tell it, Iceland’s sublime beauty carried him through the grueling task of setting an Iceland FKT as much as his strategy and persistence.

Iceland is the most beautiful country I have ever been to, but with volcanoes, glaciers, desert, and weather that will make you feel extremely small and vulnerable. After this ride, I have a full appreciation for giving this wild country the respect and admiration it deserves.

Sam Anderson takes any writing assignments he can talk his way into while intermittently traveling the American West and Mexico in search of margaritas — er, adventure. He parlayed a decade of roving trade work into a life of fair-weather rock climbing and truck dwelling before (to his parents’ evident relief) finding a way to put his BA in English to use. Sam loves animals, sleeping outdoors, campfire refreshments and a good story.