Dance Was A Gift Of The Gods To Ancient Greeks

Conny Waters – AncientPages.com – Like in most ancient cultures, dance was important to people in ancient Greece. Dance was a way to express emotions, tell stories, and communicate.

To ancient Greeks, dance was a gift of the gods and therefore thought that the best dancers had been specially gifted by the gods. 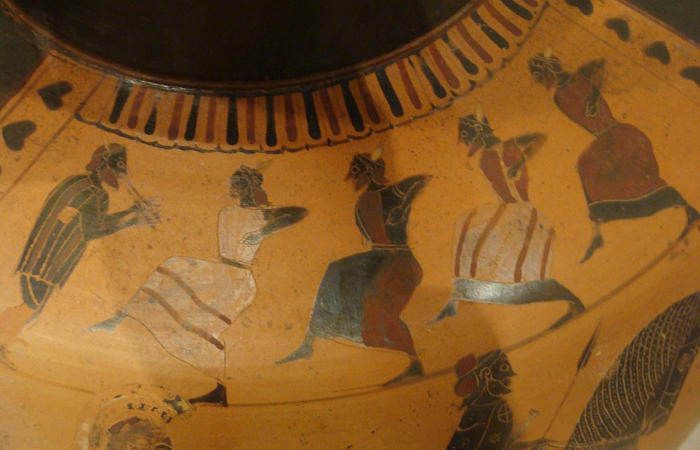 Dancing girls on an ancient Greek amphora at the Metropolitan Museum of Art in New York. Credit: Ben Sutherland – CC BY 2.0

“Despite the well-documented importance of dance in ancient Greece, most studies of ancient Greek culture hardly mention dance at all.” 1

There are nevertheless facts that provide those interested in ancient Greek history with information on how and why dance played a significant part in people’s daily life.

To ancient Greeks dance was so important that many statues were constructed in honor of the dancers.

“The Greeks danced at public festivals, religious ceremonies, and even funerals. Religious dances were simple and usually involved nothing more than swaying from side to side, the dances were known as Apollonian. Dancing was accompanied by music played on the lyre (a type of harp), and the flute.” 2

“.Most children were taught how to dance and play musical instruments, although only females danced as adults.  It was widely believed that music had various magical powers, and that it could in- spire love, soothe angry people and tame wild animals. There were songs for most public and private events, including work songs, songs for theatrical entertainments, religious songs, songs sung by soldiers going to war, wedding songs, funeral songs, love songs, drinking songs and songs that could be sung at feasts. We do not know today what the tunes sounded like, however, as very few of them were ever written down.

The first lyres, which were sacred to Apollo, were made from an empty tortoiseshell and a pair of ox horns, to which strings of animal sinew or hide were attached.

Later versions resembled small modern harps. The more elaborate kithara was a type of wooden lyre played by professional musicians, who plucked the strings with a plectrum.” 3

On some occasions, ancient Greek dances could be very provocative.  were not impressed with dancers. As previously discussed on Ancient Pages, history of the Greek theatre started with festivals held in honor of their gods honoring their gods. God Dionysus, was honored with a festival called by “City Dionysia”. In the days of Solon, people were often to be seen wandering around the streets during the festival of Di-o-ny´sus, god of wine. Interestingly, people were greatly amused by the rude songs and dances ancient Greeks later regretted inventing theater.

“The nine Muses (Mousai in Greek; Musae in Latin) were goddesses of knowledge, music, and dance and were the inspiration for all artists, poets, and playwrights of ancient Greece. “4 Terpsichore, who was one of the nine Muses was the Greek patron of lyric poetry and dancing.

Scientists who study ancient Greek dance have tried to recreate the movements based on imagery found on pottery, but this is a hard task. 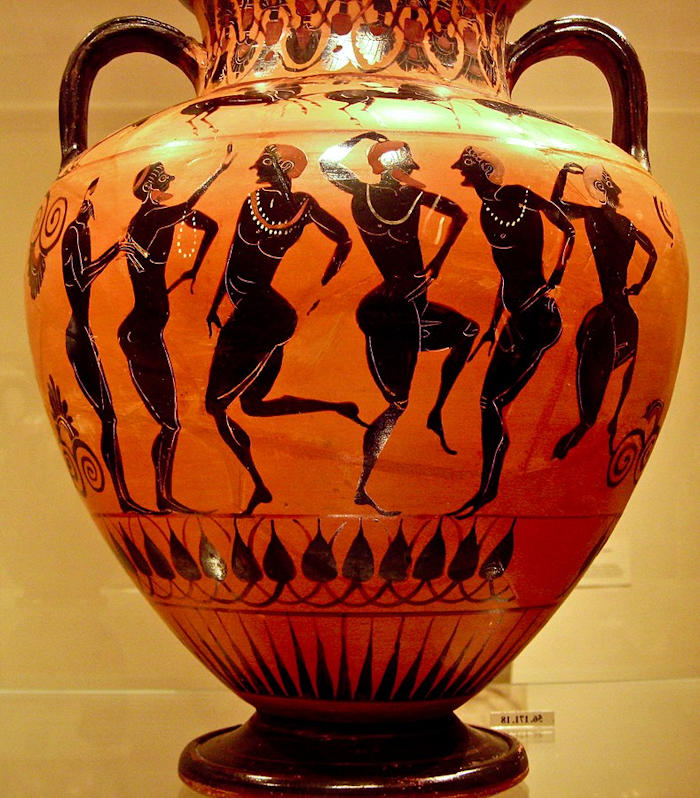 “There is a huge problem in moving from static text or image to movement; a picture only has worth as a historical document if accompanied by words or interpretation. From a formal point of view, Greek dance is a lost art and will remain so as long as there is no new and radically different evidence.

Apart from the second-century treatise Peri Orcheseos attributed to Lucian, there is no other world extant dealing exclusively with ancient Greek dancing. No technical treatise dealing with dance is present known to have survived. Nor, it seems, do any sources refer to a notation system or to any work providing a technical description of dance movements or choreographies. Dance was handed down exclusively by oral traditions; it is thus highly unlikely that actual dances could have been preserved unchanged down the centuries.” 1

One can assume dance in ancient Egypt and Greece served a similar purpose.