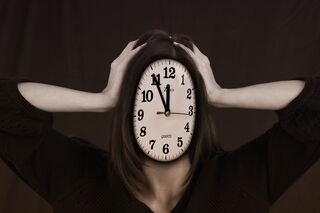 With the pandemic of the last two years nearly in the rearview mirror, academics and researchers alike are pondering the short- and long-term effects on people, especially in the area of mental health.[1] Because the routines of daily life were so extremely disrupted for so many, and the duration of the pandemic was so much longer than originally anticipated, part of the discussion naturally focuses on people’s relationship to time. How did their personalities change as a result of the two-year disruption?[2] What is the impact of the loss of hope as a result of the pandemic on how people interact?[3]

These questions are of particular importance for those who experienced the often-horrendous consequences of the pandemic, such as losing jobs, homes, livelihoods, and loved ones forever. From workers who quit their jobs in the Great Resignation to those who purchased homes in a panic, regret is on the mind of many Americans. Virtually no one was untouched in some material way by the disruption of daily life caused by the pandemic, and they want to change it.

What if we could travel back in time to revisit past memories and do things differently in order to put broken lives back together? Could we use that to try to make our lives better now?

Possibilities of time travel and the grandfather paradox

Time travel remains theoretically possible. For instance, Einstein’s theory of general relativity suggests the possibility of ”closed time-like curves” where a moving wormhole that someone entered would deposit them at a different place in space-time, theoretically allowing them to travel back in time and interact with their own past.

But a new scientific theory offers a counter view. Researchers now suggest that if time travel were a reality, people going back in time could make changes. They could stop the infection from occurring in their loved one, maybe even stop the pandemic entirely.[4] Wouldn’t that be great? We could go back and make the world a better place. As it turns out, probably not.

The theory of determinism

The research goes on to suggest that the events which occur would likely unfold in much the same way, even if we went back to change the past. In other words, someone could go back and make changes, but outcomes like loved ones dying in the pandemic would still occur. They may not occur in precisely the same way they originally happened, but events would be similar enough so that the person going back in time would still exist to go back in the first place.

So, if you’re here today to go back in time, then you would also exist in the changed version of time. But if you’re not here today because you died in the past, then you would not be here to be able to be saved if the events of your life were changed. This is because the universe may be deterministic.

Determinism is the theory that there is a cause-and-effect relationship among all events in the universe which result in this moment now. Even if you were able to go back in time and alter the past, you would essentially have the same life you have today, as would your loved ones and the world. This is because each of us, through our choices and actions, brings into being the events of this moment, meaning that changes made in the past won’t dramatically change the present or the future.

Maybe Einstein was right when he famously said, “God doesn’t play dice.” What he meant by that is the laws of Newtonian physics do not give way to the law of chance or the principle of uncertainty as implied by quantum theory.

In Newtonian physics, if someone could know the position and velocity of every particle in the universe for every moment, then they would be able to predict all of the interactions for the rest of time because they would be pre-determined. Someone would just need to have enough information to figure it out.

On the other hand, quantum mechanics suggests the opposite. According to the Heisenberg uncertainty principle, no one can observe a subatomic particle and know both where it is now and where it’s going in the future at the same time. The more accurately they try to do this, the more uncertain they make either its position or its velocity. The best someone could do is calculate probabilities.

But these new theories blow uncertainty out of the water because events adjust around you. The view that everything is as it should be for you, no matter how painful, may be how the universe actually works. So, if you have regrets, forget them. Your life would pretty much have turned out the way it is now. At least for the time being, personal destiny is a real thing.