BERLIN (AP) — The first soccer game involving an Israeli team at the stadium built for the 1936 Olympics hosted by Nazi Germany was marred Thursday by antisemitic abuse aimed at visiting fans.

Maccabi Haifa’s trip to Berlin’s Olympiastadion for its Europa Conference League game against Union Berlin ended in a 3-0 defeat for the visitors in front of 23,324 fans. Nearly 1,000 were Maccabi supporters.

The youth branch of the local German-Israeli society said on Twitter that they were targeted by some of the home team’s fans as they attended the game in a mixed block.

The Junges Forum Deutsch-Israelische Gesellschaft said they had beer thrown on them and were called “(expletive) Jews” among other insults, and that one Union fan attempted to set alight an Israeli flag taken from a female supporter until he was stopped by civil police.

“There were also Union fans who spoke up against this behavior. We moved to the Maccabi-block to be on the safe side,” the society said.

The Fare Network, which combats discrimination in soccer, said Friday that “eyewitnesses were shocked by the levels of antisemitism” at the game, and it showed pictures of a Union supporter who, it said, gave Nazi salutes toward the visiting fans “and abused those who called him out.”

Another man behind in one of the pictures can also be seen also giving a Nazi salute, which is made by extending the right arm upward with the palm flattened. It is illegal in Germany, and punishable by prison terms 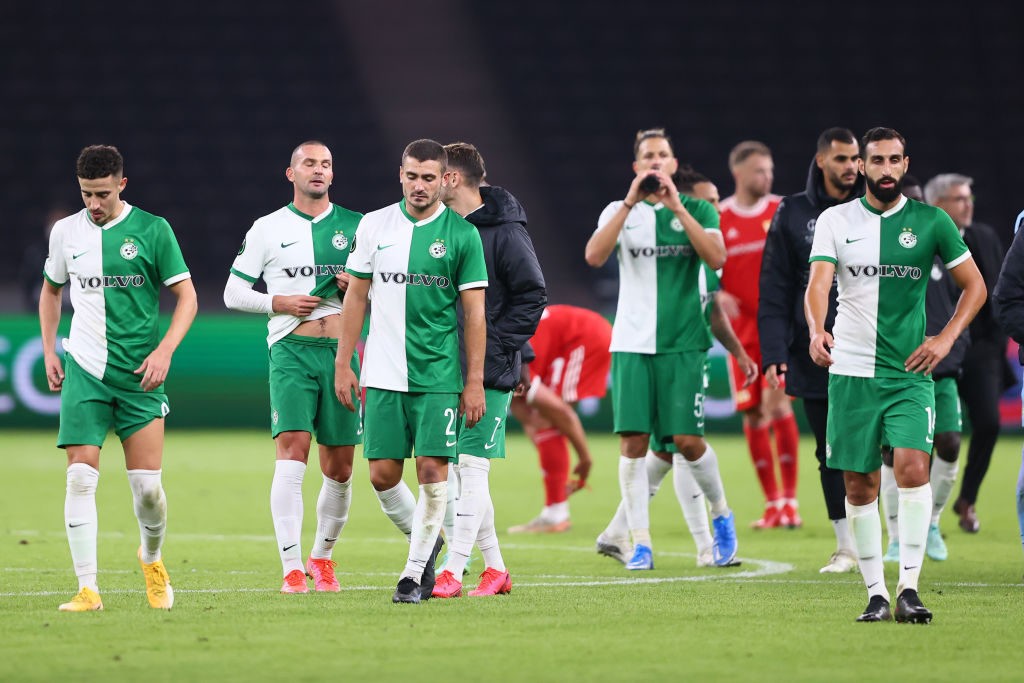 Olympiastadion is usually used by Union’s city rival Hertha Berlin, but it has been taken over by Union for European competition this season as its own stadium in the eastern borough of Köpenick doesn’t have enough seating capacity to meet UEFA demands.

Union said before the game that it was hosting Israeli embassy workers, representatives of the Jewish-Christian-Islamic dialogue project House of One, athletes from local sports club Makkabi Berlin, and others for the match.

“We know that this game is of very special importance beyond the sporting side for our guests from Haifa and for the Jewish community in Berlin,” Union president Dirk Zingler had said.

Maccabi Haifa made no mention of the abusive incidents after the game.

“Thank you for the great hospitality. It was an exciting game in front of your and also our fans, and also in this stadium, which has its meaning,” the club said on Twitter. “Thank you, and till we see each other again in Israel.”

The Union Berlin fan blog Textilvergehen said the words “disgusting” and “absolutely shameful” were not adequate to describe the abuse.

The youth branch of the local German-Israeli society on Friday expressed its gratitude for the support it received from the majority of fans.

“Thank you for the wave of solidarity online and to the Union fans who showed their solidarity with us in the stadium!” the group said on Twitter. “The majority of Unioners welcomed Maccabi in a friendly manner and celebrated soccer together.”