“Japan does not support the scheme as it would involve applying Russian laws to the islands,” Motegi told Lavrov in the meeting, as paraphrased by Kyodo News.

“With regard to joint economic projects on the islands, they should be implemented without infringing on Japan’s legal position,” Japan’s top diplomat added.

The islands in question form a chain stretching between Hokkaido, Japan’s northernmost main island, and Russia’s Kamchatka Peninsula. Russia named the archipelago the Kuril Islands, while Japan refers to the chain as the Northern Territories.

The two countries have been engaged in a dispute over the islands’ control since the end of World War II, preventing them from signing a formal peace treaty to end hostilities more than 75 years after the conflict. Tokyo claims the then-Soviet Union unlawfully seized the islands after Japan’s surrender, while Moscow maintains that it did so legally.

Russian President Vladimir Putin announced that Moscow plans to set up a tariff-free zone on the Kuril Islands at a plenary meeting of the Eastern Economic Forum on September 3. Putin said Russia would create “an unprecedented set of benefits and incentives” on the islands “where we will completely exempt businesses from paying key taxes on profits, property, land, and transport taxes … for 10 years.” 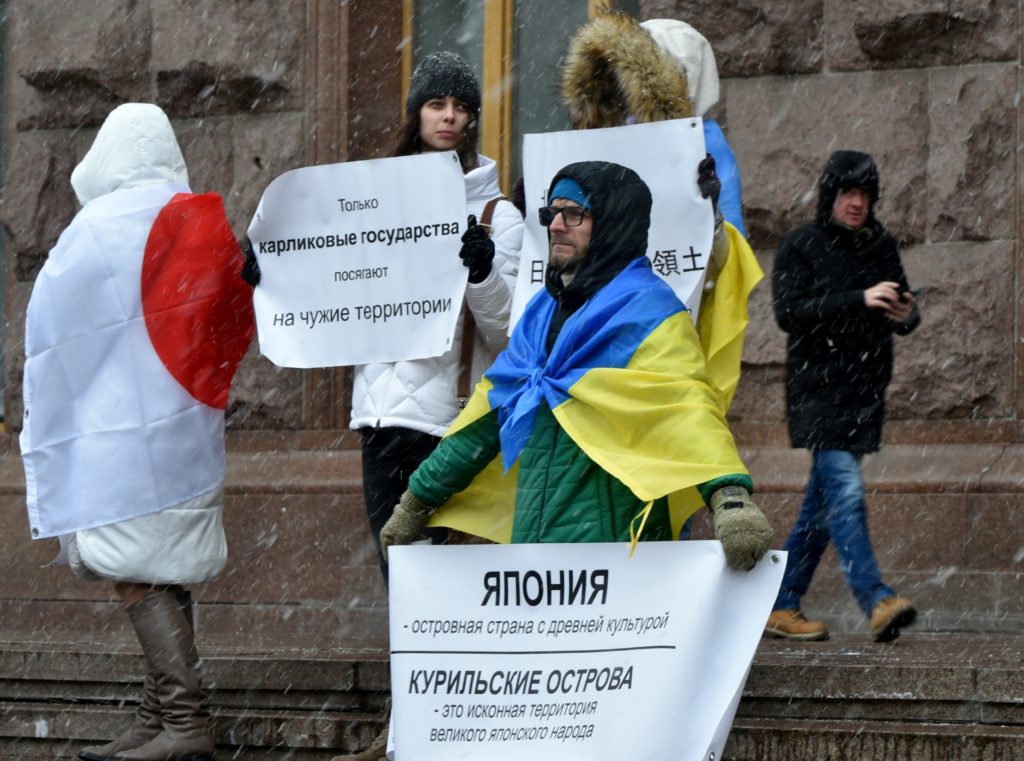 Activists covered with Ukrainian and Japanese flags hold placards reading “Kuril Islands are an original territory of the great Japanese people” and “Russia doesn’t care about its own territory but likes the others” as they demonstrate in central Kiev to show solidarity with Japan marking Northern Territories Day on February 7, 2020. – Japan maintains its claim over the four southernmost islands of the Kuril chain, known as the Northern Territories in Japan. Nationalist sentiment on both sides – Russia and Japan – makes both governments wary of considering concessions. (Photo by SERGEI SUPINSKY/AFP via Getty Images)

“For such companies, lower insurance premiums will be established at a rate of 7.6 percent, also for 10 years. In addition, a free customs zone will operate throughout the Kuril Islands, that is, it will be easier and more convenient to import goods, equipment, and export finished products,” he stated.

Putin stressed that the benefits would apply to companies “that do not just register in the Kuril Islands, but actually work in the region, construct buildings, enterprises, and hire employees,” according to TASS, a Russian state-owned news agency.

“Exceptions” to the free customs program “will include the work of intermediaries, manufacturing excisable goods, extraction and processing of hydrocarbons, as well as catching valuable aquatic biological resources,” the Russian president added.

“The introduction of the free customs zone treatment on the Kuril Islands is not simply under discussion, preparatory works are completing,” the president of Russia’s Chamber of Commerce and Industry, Sergey Katyrin, told TASS September 2.

He revealed Moscow “expect[s] the introduction of special tax treatment to attract foreign investors to the work on this territory, first of all from Asian countries.”

Russia is specifically reaching out to Beijing in the hopes of using its “experience in developing islands in the South China Sea” to help Moscow develop the Kuril Islands, China’s state-run Global Times reported September 3.

“We acknowledge Chinese experience in developing islands in the South China Sea and would like to use it in improving living and business conditions on the Kuril Islands,” Yuri Tavrovsky — the head of the Expert Council of the Russian-Chinese Committee for Friendship, Peace, and Development — told the newspaper.

“These islands are critically important for safe navigation in the Western Pacific and the Northern Sea route,” he noted.

“[A] tariff-free zone needs to be set up swiftly on the Kuril Islands,” Russian Deputy Prime Minister Yury Trutnev told reporters on September 6, as paraphrased by the Japan Broadcasting Corporation (NHK).

The Russian government “wants to complete necessary work” to establish its special economic zone on the islands “by the end of this year,” the NHK quoted an unnamed Russian “federal minister in charge of the development of the Russian Far East” as saying in a television interview on September 4.

“The minister expressed hope that the measure will attract investment in fisheries and tourism industries,” according to the Japanese broadcaster.