Angela Sutherland  – AncientPages.com – Kali (in Sanskrit, “black”) is in Hindu beliefs, the goddess of death, destruction, fear, and horror who destroys ignorance brings world order, liberates, and blesses those who seek to know God. Kali symbolizes power and divine strength.

Known by many other names, Kali is the chief of the Mahavidyas, a group of ten Tantric goddesses who each form different aspects of the Mother Goddess Parvati. Kali is worshipped by Hindus throughout India and Nepal and by Sri Lankan Buddhists. 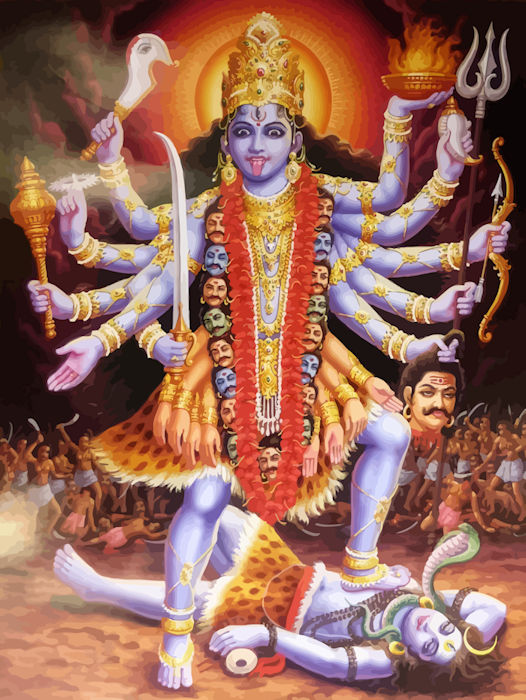 On one side, as the reincarnation of Shiva’s wife, Parvati, Kali symbolizes fertility, love, beauty, harmony, marriage, children, and devotion. More commonly, however, she is associated with the dark and evil aspect of Parvati, and giving her associations with death, time, sexuality, violence.

First of all, this mighty goddess represents Shakti, the Hindu word for feminine energy, fertility, and creativity. As such, she is one of the central deities of the Goddess-oriented Shakti sect known as Shaktism. Kali symbolized the Divine Mother, Mother of the Universe, Parvati, or Adi Shakti in other religious movements and tantric sects.

Kali’s name in the sacred Vedas is associated with the God of fire Agni. Her name Kali first appears in Rigveda. Also known as Kalikamata (“black earthly mother”), Kalarati (“black night”), among Tamils ​​- as Kottravey. Kalika is also the form of the name Kali.

Kali (‘she who is death’ or ‘she who is black) usually has a very intimidating appearance. She is often portrayed standing or dancing on the Hindu god Shiva (her consort), who lies calm beneath her.

She is usually depicted as a tinny four-armed woman with blue skin and long ruffled hair, which form a mysterious curtain of death that envelops all life. In other depictions, Kali is naked or dressed in the coat of a panther. In the upper left hand, she holds a bloody sword with the power to destroy duality and doubts. “Churi,” a dagger symbolizing a sacrificial knife, is usually associated with this goddess and her terrifying manifestations.

In the lower left hand, she holds the head of a demon, symbolizing the cutting off of the ego. With her upper right hand, she makes a protective gesture that drives away fear, while with her lower right hand, she blesses for the fulfillment of all desires. 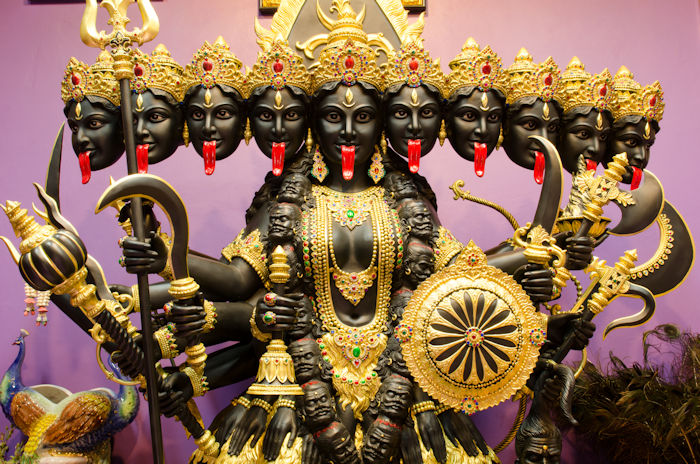 Kali’s four hands symbolize the four cardinal directions and the four main chakras, but occasionally, she is portrayed with multiple arms (even as many as eighteen), so their number varies. Each goddess’s arm traditionally holds an object like a dagger, chakra, cup, whip, sword, trident, drum, lotus blossom, chakra, or a shield.

A belt made of human hands, thrown over the goddess, means a decisive and inevitable karma action.

The goddess herself corresponds to three times: past, present, and future, and her three eyes are in total control of creation, preservation, and destruction.

Its dark blue color is the color of infinite cosmic, eternal time, as well as death. This symbolism draws attention to the dominance of Kali over the realm of mortality, and black color means only pure unclouded awareness of a person.

The wreath decorated with skulls means a series of human incarnations and shows its ability to free the mind from identifying itself with the body. This garland symbolizes wisdom and strength. There are precisely 50 skulls – according to the number of letters of the Sanskrit alphabet. The goddess stands on a corpse, which only confirms the temporary, short-lived nature of the physical body.

The blood-red tongue of the goddess Kali signifies the Rajas (passion, in Sanskrit) aspect of the human being. As for rajas guna, it is the second, or middle, of the universe’s three qualities (gunas). Initially, the word ‘guna’ means “quality” or “attribute.” Rajas guna is the quality of energy, movement, activity, ambition, action, and change.

Kali is a multi-faceted Goddess who guides life from the moment of conception to death. It symbolizes the cosmic power of eternal time. Legends say that Kali is mightier than even the supreme Gods Brahma, Vishnu, and Shiva. It is also said that she is endowed with their combined divine powers. The Gods too are said to have given her their weapons with which the great goddess uprooted evil and established virtue on earth.

On the cosmic level, Kali is related to the elements of air or wind, Vayu, prana. (According to the yoga tradition, there are five movements or functions of prana known as the vayus – ‘winds.’)

This force fills the universe as the energy of transformation. It acts quickly and leaves no traces behind, causing radical changes. Kali is the perception of the lightning of truth, which denies all illusions. It embodies creation, preservation, and destruction, causes both love and horror.

In the human body, Kali exists in-breath or the life force (prana). The crescent moon was considered the symbol of the mighty Kali.

Mishra, T. N. Impact of Tantra on Religion and Art

Bunce, Frederick W. A Dictionary of Buddhist and Hindu Iconography