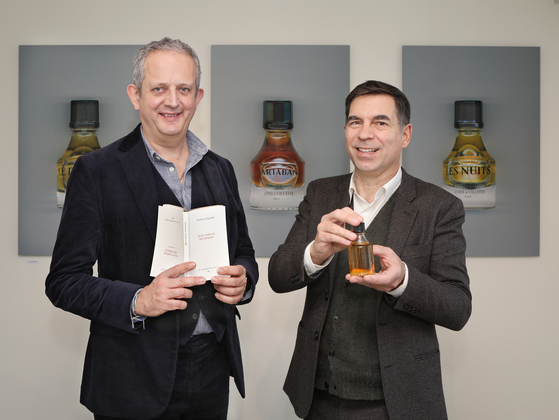 
A strange yet pleasantly calming aroma was emanating from every person walking out from the Paris-based lifestyle brand Astier de Villatte’s Seoul flagship store in Hannam-dong, central Seoul, on Dec. 1. This luxurious, incense-like smell is said to be a modern version of kyphi, which is a temple incense that was used by ancient Egyptians from as early as the 5th and 6th dynasties of the Old Kingdom (2686 B.C. – 2181 B.C.). It is also one of Astier de Villatte’s new perfumes — Le Dieu Bleu.

“We are here today to introduce three new perfumes — Le Dieu Bleu, Artaban and Les Nuits — to our Korean consumers,” said Ivan Pericoli, one of the founders of Astier de Villatte. “Because what we do is create something beautiful for the present and the future by getting inspired by something beautiful from the past, we wanted to do the same for our new perfumes. So what we are showing you today are not just ordinary perfumes a brand launches for its consumers, but an outcome of decades of research on the history of perfumes and recreation of such ancient scents.” 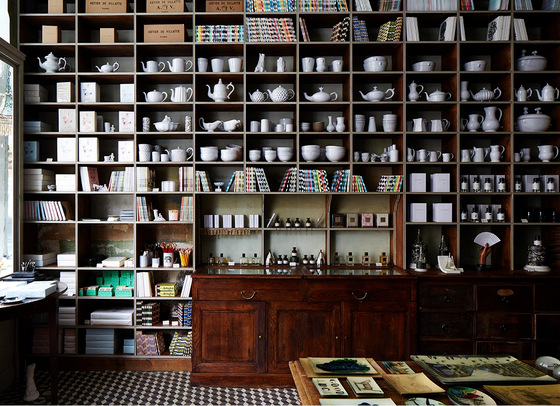 
Founded in 1996 by two French men — Benoît Astier de Villatte and Pericoli — Astier de Villatte began as an artisanal ceramics workshop in Paris and has grown into a global lifestyle brand today. Their ceramics are hailed by home décor lovers worldwide who praise the uneven forms of the handcrafted ceramics the brand offers and avoids calling them products but rather art works. Their first flagship store opened four years after they started their line on Rue Saint-Honoré in Paris. A second store opened in Paris in 2016. Then, after witnessing the immense popularity of the brand among Korean consumers, the founders decided to open up its third flagship store last September in Seoul.

While the two founders are in Seoul for the perfume launch, the Korea JoongAng Daily sat down with them to hear more about the new perfumes. The following are edited excerpts from the interview.

Q. How did the perfumes come to fruition?


A. Pericoli: You will be familiar with French star perfumer Dominique Ropion. We heard that he’s been working for the past 25 years with this French anthropologist Annick Le Guerer who is an expert in the history of perfumery, to recreate some of the ancient scents using ancient recipes from old texts that Guerer was able to get a hold of.
Because she dedicated her life to studying the history of perfume in the 70s and 80s, she was able to get her hands on all sorts of ancient documents and naturally it caught Ropion’s interest, and our interest about three years ago. We told them that there will be no limitations to the budget and that they can use as much resources as they want to recreate the ancient scents. That is how the three perfumes came to birth today.
The first perfume is called Le Dieu Bleu. It is one version of ancient Egypt’s kyphi. There are many different formulas to create kyphi and it is said it can contain as many as 40 different materials. Of course, to create the modern version of kyphi, we had to exclude materials that are now illegal and use others as substitutes that are most similar. For flowers that existed 3,000 years ago but not anymore, we also had to find other alternatives. But we believe it’s the closest we can get to the ancient kyphi. One could only imagine what it smelt like until we were able to recreate it with master perfumer Ropion and genius perfume expert Guerer.

Can you tell our readers the history behind the other two perfumes as well?


Pericoli:  The second one is still from B.C. but during the Persian civilization. The Egyptian civilization influenced the ancient Romans and the Greeks, which eventually influenced the Persian civilization. It is said that the Persian kings used a lot of perfume. The area where the kingdom of Persia used to be located is today’s Iran and Egypt. One of the Persian king’s name, who adored perfumes, was Artaban so we named our second perfume after him. The base materials that go into this perfume are similar to Le Dieu Blue but because it’s combined differently, it creates a totally different scent.
The third Les Nuits has a wonderful story. It came to us like a miracle. You know French novelist George Sand. She was not just a great novelist but was and is greatly admired by women because she stood up for them and fought against the prejudices of conservative society. She had many lovers and one of them was Frederic Chopin. From 1839 to 1846, it is said that the two lovers spent a lot of time in Sand’s country manor in Nohant where its garden is filled with beautiful roses. Christian Sand, the wife of Sand’s great-great son who was managing Sand’s legacy in the country manor in Nohant, handed a small bottle of perfume that was once used by Sand to Guerer. We were able to extract several drops of the perfume that was so tightly sealed for hundreds of years and proved that it was from the mid-19th century. We found the exact formula and were able to recreate it for consumers who are curious to find out what kind of scent Chopin was drawn to.

Why are you so dedicated to supporting this project? It seems like the brand is investing quite a lot just to launch a perfume.


Astier de Villatte: This project is in line with the DNA of the brand. We want to shed light on beautiful things from the past — bring light on things that are forgotten. That is why we were naturally drawn to the two genius’ research and wanted to support that and it is a privilege for us to introduce such valuable perfumes through Astier de Villatte.

They were able to recreate about 25 perfumes and we are here today introducing three. I think we will launch one by one through the brand when they are ready. They are all from history — some are from the 18th century, the 17th and so on and they all have as interesting history as these three.

Astier de Villatte’s new perfumes are modern versions of ancient scents that date as far back as 3000 B.C. to as early as the 19th century. From left are Artaban, Le Dieu Bleu and Les Nuits. [ASTIER DE VILLATTE]

Were you concerned about what kind of scent would be created and that it may not appeal to the people of today?


Pericoli: We had some concerns and fears but they didn’t act as an obstacle to creating something new. We were so relieved to receive so many favorable reactions to the perfumes because we didn’t know what kind of reaction we were going to have when we first started this adventure.


Astier de Villatte: This is an unprecedented project so of course we were concerned. But we have our trust in Ropion. When he was so happy with the outcome — he who created so many perfumes that people today use every single day like Lancome’s La Vie Est Belle, I knew these three perfumes he created with all his heart will also work. 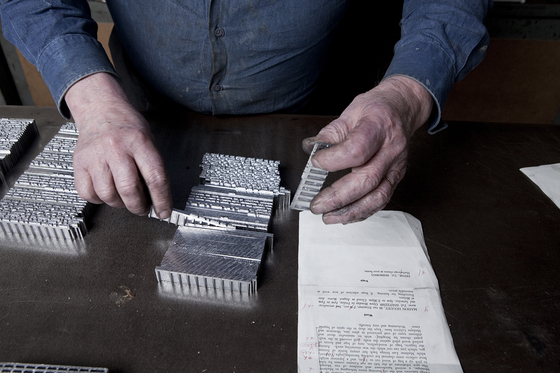 The co-founders also published a book on the three perfumes through their publishing house S.A.I.G that uses a traditional metal printing method. [ASTIER DE VILLATTE] 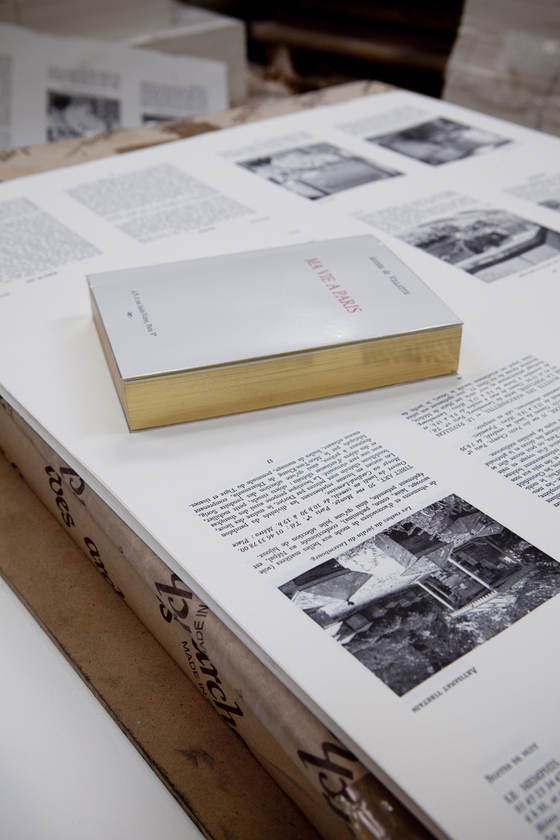 After acquiring the printing house, the co-founders published their first book “Ma Vie a Paris,” which is like a city guide to Paris, in 2019. The book comes in English and French. [ASTIER DE VILLATTE]

You also wrote a book about the process that includes some details about the three perfumes and their materials based on research done by Guerer and the conversations you had with Ropion. It’s amazing to see you have it in both French and Korean. Why was it important for you to record these things in a book?


Astier de Villatte: We love books like all Parisians do. I think what we do at Astier de Villatte and our worldview began with the education we received from our parents through books. So books are an important part of us. As we said, we are especially drawn to beautiful things from the past and want to shed light on the ones that were less appreciated. It was the case for the metal printing plates and linotype machines that were slowly disappearing from our lives. There was this old printing house that used the traditional metal type we loved so much but one day, the owner, who is 83 years old, told us that he has to close down the business, so we decided to acquire the business and keep it alive. It’s called S.A.I.G and is now the only printing house in Paris that uses the traditional linotype.