“We assess it’s around 100 Americans and LPRs currently ready to go,” the official declared. “And that’s the pool we’re focused on at the moment.”

For weeks, President Joe Biden’s administration has repeatedly asserted that “about 100” American citizens were stranded in Afghanistan, without providing a number for LPRs (green card holders).

Now, the State Department official is saying roughly 100 U.S. citizens and green card holders remain in the country, noting that the administration has evacuated at least 85 U.S. citizens and 79 LPRs since President Biden pulled out all U.S. troops on August 31, ending a two-week-long military evacuation effort before pulling out all American civilians. 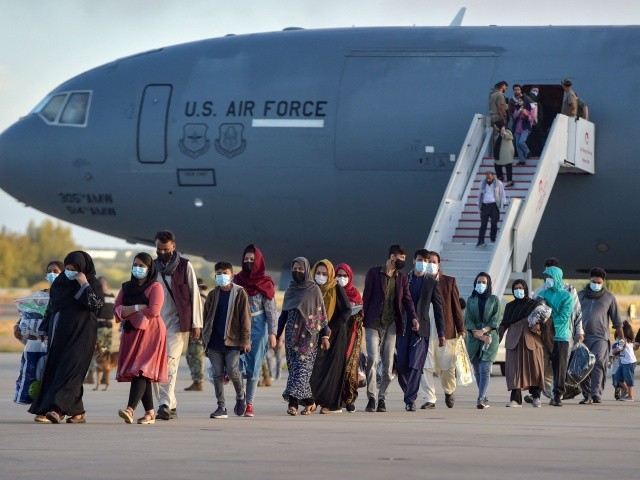 Refugees disembark from a U.S. air force aircraft after an evacuation flight from Kabul at the Rota naval base in Rota, southern Spain, on August 31, 2021. (Photo by CRISTINA QUICLER/AFP via Getty Images)

“The reason I say ‘at least’ is because an additional number of American citizens and legal permanent residents have departed Afghanistan in the last month on private charters,” the official explained.

State Department officials are unsure how many Americans have fled Afghanistan on private charters because those flights go to other countries and do not get direct support from the Biden administration, the official added.

“Our highest priority in Afghanistan, of course, remains helping those American citizens who wish to leave the country now to do so,” the official noted, without specifying when the estimated 100 U.S. citizens and green card holders will fly out of Kabul.

The unnamed official conceded the State Department does not have a precise count of Americans stranded in Afghanistan because it changes every day, the official stressed.

After the group of roughly 100 U.S. citizens and LPRs leave, the State Department will continue to help with the evacuation of any other Americans in Afghanistan “whether they’re people who have just come to our attention, whether they’re people that we’ve been talking to and in touch with on a periodic basis who changed their mind,” the unnamed official said.

“We’re also going to continue working closely with other governments and with a range of outside advocates to support the departure of some Afghans who are seeking to leave the country,” the official added.

The State Department continues to push the Taliban to reopen the Kabul airport to commercial traffic and grant safe passage to U.S. citizens, legal residents, and at-risk Afghans seeking to flee Afghanistan. 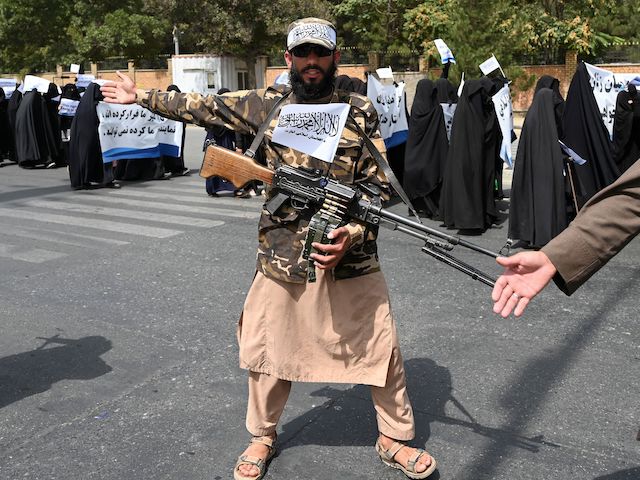 An armed Taliban fighter escorts veiled women as they march during a pro-Taliban rally outside the Shaheed Rabbani Education University in Kabul on September 11, 2021. (Aamir Qureshi/AFP via Getty Images)

“Many people continue to work this problem all day, every day, in pretty much every time zone,” the official said, adding:

In all of our interactions and our communications with the Taliban, whether it’s directly or indirectly, we continue to stress one of our top priorities … is freedom of movement and safe passage for our citizens, our legal residents, and for a range of Afghans who wish to travel and want to leave the country at this time, whether it’s for a temporary or a longer-term.

Moreover, the official said the State Department is “constantly touching base with American citizens that we think are still in the country … to see if they’re ready to leave.”

The Taliban declared victory on August 15 and demanded that all foreign forces pull out of the country by August 31. Biden caved into the Taliban’s request.