Jan Bartek – AncientPages.com – Two-million-year-old DNA has been identified for the first time—opening a ‘game-changing’ new chapter in the history of evolution.

Microscopic fragments of environmental DNA were found in Ice Age sediment in northern Greenland. Using cutting-edge technology, researchers discovered the fragments are one million years older than the previous record for DNA sampled from a Siberian mammoth bone. 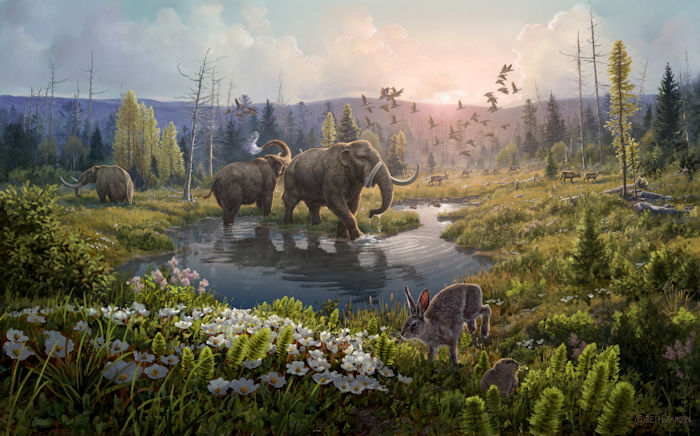 The ancient DNA has been used to map a two-million-year-old ecosystem which weathered extreme climate change. Researchers hope the results could help to predict the long-term environmental toll of today’s global warming.

The discovery was made by a team of scientists led by Professor Eske Willerslev and Professor Kurt H. Kjær. Professor Willerslev is a Fellow of St John’s College, University of Cambridge, and Director of the Lundbeck Foundation GeoGenetics Center at the University of Copenhagen where Professor Kjær, a geology expert, is also based.

The results of the 41 usable samples found hidden in clay and quartz are published today in Nature.

Professor Willerslev said: “A new chapter spanning one million extra years of history has finally been opened and for the first time we can look directly at the DNA of a past ecosystem that far back in time.

“DNA can degrade quickly but we’ve shown that under the right circumstances, we can now go back further in time than anyone could have dared imagine.”

Professor Kjær said: “The ancient DNA samples were found buried deep in sediment that had built-up over 20,000 years. The sediment was eventually preserved in ice or permafrost and, crucially, not disturbed by humans for two million years.”

The incomplete samples, a few millionths of a millimeter long, were taken from the København Formation, a sediment deposit almost 100 meters thick tucked in the mouth of a fjord in the Arctic Ocean in Greenland’s northernmost point. The climate in Greenland at the time varied between Arctic and temperate and was between 10-17C warmer than Greenland is today. The sediment built up meter by meter in a shallow bay.

Scientists discovered evidence of animals, plants and microorganisms including reindeer, hares, lemmings, birch and poplar trees. Researchers even found that Mastodon, an Ice Age mammal, roamed as far as Greenland before later becoming extinct. Previously it was thought the range of the elephant-like animals did not extend as far as Greenland from its known origins of North and Central America.

Detective work by 40 researchers from Denmark, the UK, France, Sweden, Norway, the U.S. and Germany, unlocked the secrets of the fragments of DNA. The process was painstaking—first they needed to establish whether there was DNA hidden in the clay and quartz, and if there was, could they successfully detach the DNA from the sediment to examine it? The answer, eventually, was yes. The researchers compared every single DNA fragment with extensive libraries of DNA collected from present-day animals, plants and microorganisms. A picture began to emerge of the DNA from trees, bushes, birds, animals and microorganisms. 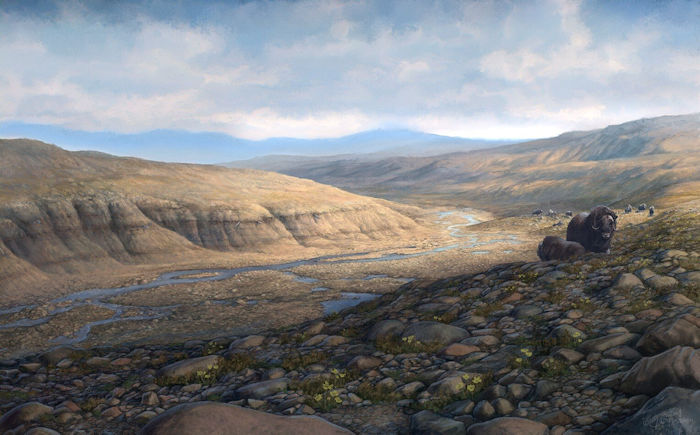 Some of the DNA fragments were easy to classify as predecessors to present-day species, others could only be linked at genus level, and some originated from species impossible to place in the DNA libraries of animals, plants and microorganisms still living in the 21st century.

The two-million-year-old samples also help academics build a picture of a previously unknown stage in the evolution of the DNA of a range of species still in existence today.

Professor Kjær said: “Expeditions are expensive and many of the samples were taken back in 2006 when the team were in Greenland for another project, they have been stored ever since.

“It wasn’t until a new generation of DNA extraction and sequencing equipment was developed that we’ve been able to locate and identify extremely small and damaged fragments of DNA in the sediment samples. It meant we were finally able to map a two-million-year-old ecosystem.”

Assistant Professor Mikkel W. Pedersen, co-first author on the paper and also based at the Lundbeck Foundation GeoGenetics Center, said: “The Kap København ecosystem, which has no present-day equivalent, existed at considerably higher temperatures than we have today—and because, on the face of it, the climate seems to have been similar to the climate we expect on our planet in the future due to global warming.

“One of the key factors here is to what degree species will be able to adapt to the change in conditions arising from a significant increase in temperature. The data suggests that more species can evolve and adapt to wildly varying temperatures than previously thought. But, crucially, these results show they need time to do this. The speed of today’s global warming means organisms and species do not have that time so the climate emergency remains a huge threat to biodiversity and the world—extinction is on the horizon for some species including plants and trees.” 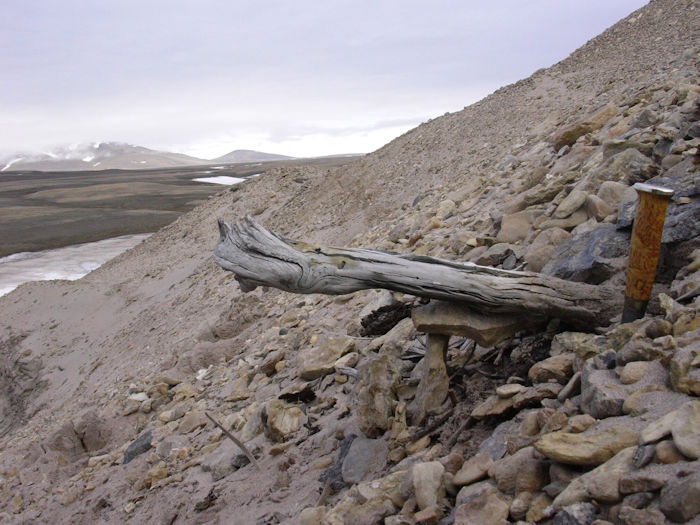 A two million- year-old trunk from a larch tree still stuck in the permafrost within the coastal deposits. The tree was carried to the sea by the rivers that eroded the former forested landscape. Credit: Professor Svend Funder

While reviewing the ancient DNA from the Kap København Formation, the researchers also found DNA from a wide range of microorganisms, including bacteria and fungi, which they are continuing to map. A detailed description of how the interaction—between animals, plants and single-cell organisms—within the former ecosystem at Greenland’s northernmost point worked biologically will be presented in a future research paper.

It is now hoped that some of the ‘tricks’ of the two-million-year-old plant DNA discovered may be used to help make some endangered species more resistant to a warming climate.

Professor Kjær said: “It is possible that genetic engineering could mimic the strategy developed by plants and trees two million years ago to survive in a climate characterised by rising temperatures and prevent the extinction of some species, plants and trees. This is one of the reasons this scientific advance is so significant because it could reveal how to attempt to counteract the devastating impact of global warming.”

The findings from the Kap København Formation in Greenland have opened up a whole new period in DNA detection. 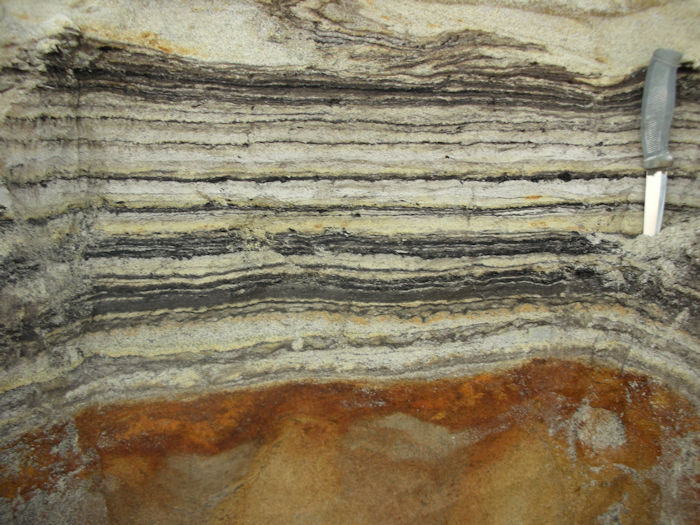 Professor Willerslev explained: “DNA generally survives best in cold, dry conditions such as those that prevailed during most of the period since the material was deposited at Kap København. Now that we have successfully extracted ancient DNA from clay and quartz, it may be possible that clay may have preserved ancient DNA in warm, humid environments in sites found in Africa. 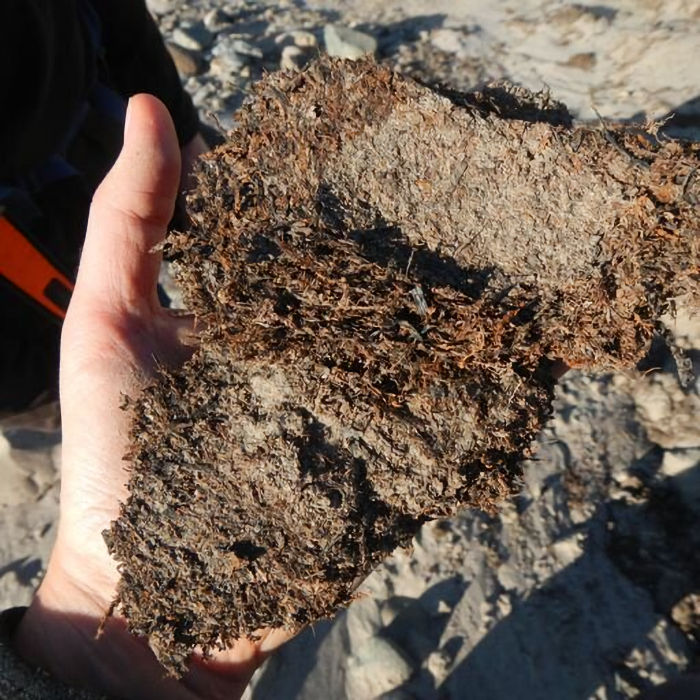 Newly thawed moss from the permafrost coastal deposits. The moss originates from erosion of the river that cut through the landscape at Kap København some two million years ago. Credit: Professor Nicolaj K. Larsen

“If we can begin to explore ancient DNA in clay grains from Africa, we may be able to gather ground-breaking information about the origin of many different species—perhaps even new knowledge about the first humans and their ancestors—the possibilities are endless.”

The study was published in Nature