Jan Bartek – AncientPages.com – Archaeologists have discovered what may be the earliest known narrative scene, telling an ancient story, at the 11,000-year-old site of Sayburç in south-eastern Turkey.

The two panels depict people interacting with dangerous animals. In one, a male human grasps their phallus while leopards approach from either side. In the other panel, a squatting male holding a rattle or snake faces a bull. The teeth of the leopards and horns of the bull are emphasized, highlighting the danger in the scenes. 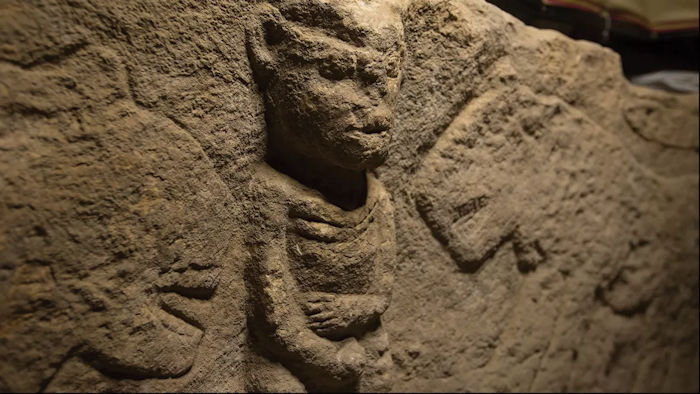 A male figure holding his phallus and flanked by leopards is part of the world’s oldest known narrative scene. Credit: K. Akdemir

While similar art has been found at other ancient settlements in the region, the Sayburç images are unique in that they appear to be related to one another. The two panels are horizontally adjacent, creating a progressing scene. Each features similar images—someone facing off against dangerous animals—also indicating a coherent narrative.

“These figures, engraved together to depict a narrative, are the first known examples of such a holistic scene,” said archaeologist Dr. Eylem Özdoğan, from Istanbul University, “This was a picture of the stories that formed the ideology of the people of that period.”

The discovery, reported by Dr. Özdoğan in the journal Antiquity, was made during excavations at Sayburç which began in 2021. The site is located beneath a modern village in the Şanlıurfa Province of Turkey.

The excavations revealed the site was inhabited during the Neolithic, in the 9th millennium BC. This period saw an important transition, with people shifting from a mobile hunter-gatherer lifestyle to farming and living in long-term settlements like Sayburç.

Archaeologists uncovered several residential buildings as well as a large communal structure. This may have served as a place for special gatherings, with benches lining the walls. The narrative images were found carved into the back rests of some of these benches.

Given that the art decorated an important structure, Dr. Özdoğan believes that the figures depicted in the narrative scenes were important characters to this early farming community. Perhaps historical characters or mythical figures that were a key part of the community’s traditions. 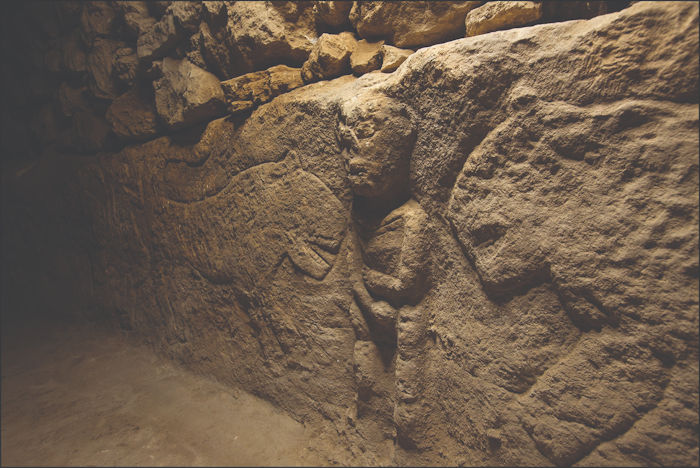 One panel from the scene, which features a male figure holding its phallus while flanked by two leopards. Credit: K. Akdemir

“Archaeological evidence can provide some insight into the traditions of the past societies but clearer evidence rarely survives, so this discovery is exciting,” said Dr. Özdoğan, “Sayburç has very clear evidence in this respect and has the potential to tell us a lot about the Neolithic society that we do not know, yet.”

The communal building is still only partially excavated, so more scenes from this ancient story may yet be uncovered.

The study was published in the journal Antiquity